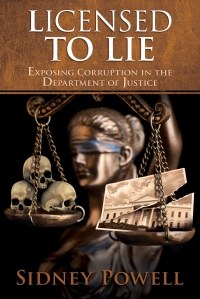 Tuesday, July 15 at 2pm-4pm – Come over to Old Capitol Books to meet Sidney Powell, powerhouse attorney and author of Licensed to Lie: Exposing Corruption in the Department of Justice.

In Licensed to Lie, Powell leads readers through the disturbing events, missteps, cover-ups, malfeasance, and corruption of justice that have caused her to question the system she has been committed to for over thirty years. With the narrative style of a legal thriller, this true story captures the drama of the law, the real human costs and consequences of the corruption of justice, and cautions for anyone facing the Department of Injustice.

“This book should serve as the beginning of a serious conversation about whether our criminal justice system continues to live up to its vaunted reputation. As citizens of a free society, we all have an important stake in making sure that it does.”

– From the Foreword by Alex Kozinski, Chief Judge, United States Court of Appeals for the Ninth Circuit, in his personal capacity

“This book reads like a cross between investigative journalism and courtroom drama.”  – William Hodes, Coauthor, The Law of Lawyering

“That our government is corrupt is the only conclusion. This book helps the people understand the nature of this corruption—and how it is possible for federal prosecutors to indict and convict the innocent rather than the guilty. Every business person– and anyone– who values freedom should read and heed the warnings of this compelling work.”  – Victor Sperandeo, CEO & author – Trader Vic: Methods of A Wall Street Master

“When you’ve finished reading this fast-paced thriller you will want to stand up and applaud Powell’s courage in daring to shine light into the darkest recesses of America’s justice system. The only ax Powell grinds here is Truth.”  – Patricia Falvey, Author of The Yellow House

Sidney Powell served in the Department of Justice for ten years in Texas and Virginia and has devoted her private practice to federal appeals for the past twenty years. She was the youngest Assistant United States Attorney in the country when she was appointed. Later, she became Chief of the Appellate Section for the Western and Northern Districts of Texas. She is a Fellow of the American Academy of Appellate Lawyers and served as its President. Recognized by her peers as a “Super Lawyer” and named as one of the “Best Lawyers in America” for years, she has been lead counsel in more than 500 appeals in the United States Court of Appeals for the Fifth Circuit, resulting in more than 180 published opinions, and was President of the Bar Association of the Fifth Federal Circuit. Powell’s briefs have long been featured as samples for practitioners.