So the reading group is back! And we decided we were feeling masochistic, so we’ve decided to start with Deleuze and Guattari’s Thousand Plateaus.

“A Thousand Plateaus continues the work Gilles Deleuze and Félix Guattari began in Anti-Oedipus and has now become established as one of the classic studies of the development of critical theory in the late twentieth century. It occupies an important place at the center of the debate reassessing the works of Freud and Marx, advancing an approach that is neither Freudian nor Marxist but which learns from both to find an entirely new and radical path. It presents an attempt to pioneer a variety of social and psychological analyses free of the philosophical encumbrances criticized by postmodern writers. A Thousand Plateaus is an essential text for feminists, literary theorists, social scientists, philosophers, and others interested in the problems of contemporary Western culture.” 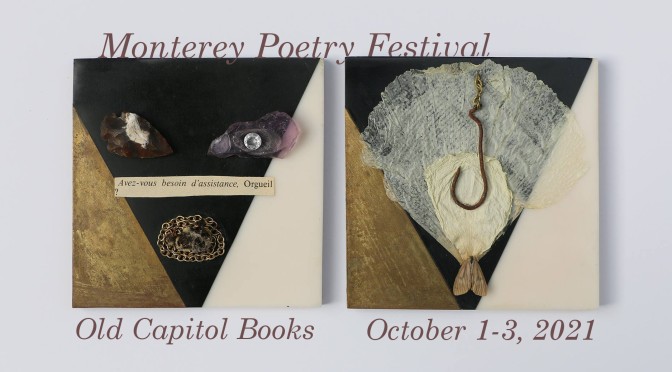 We’re excited to be organizing the 2021 Monterey Poetry Festival (October 1st-3rd, 2021). This will be a collection of poets with diverse styles, subjects, and performances.

All events will be held at Old Capitol Books, 482 Alvarado, downtown Monterey. All events are ticketed. More information coming soon.

Bedrooms (Ari Murillo Edwards) is a local Salinas guy who makes up songs and likes to share them with their pals and community. Their music comes straight from the heart, and it is the hope that their songs will crawl their way into the caverns of others’ hearts as well.

Chris Carr is a Brooklyn-based multidisciplinary conceptual artist, photographer, emcee, educator and instrumentalist. In 2010, he founded Brooklyn Wildlife, a creative arts incubator specializing in independent art and music. He hosts podcasts and interview series and has organized hundreds of live events and performances. He’s spent twenty years playing music and has toured more than half the country. Along with Melissa Hunter Gurney, he co-founded the art space Gamba, the GAMBAZine publication, and Black Land Ownership. He leads Diversity and Inclusion workshops and developed Curating the Classroom to help schools deactivate systemic oppression. He is intrigued by the history of cultural expression, power relationships, semiotics, post-modern sociological theory, and interpersonal dynamics. His work takes on themes of normalcy vs. deviancy, alternative culture, social inequality, and the metaphysically interstellar.

Rocio Carranza-Pineda is an up-and-coming Latinx poet and a first generation college student at California State University, Monterey Bay. She is set to become the 1st in her family to graduate and finds joy expressing herself through poetry. Rocio prefers writing poems in Spanish and English to reflect her own cultura.

Claire Durand-Gasselin is a visual artist and poet, born in France, and living in the US since 2014. After 5 years in NYC, she’s currently residing on the beautiful Central Coast of California. On the side of her art and poetry, she designs books for indie presses and authors. She’s also an occasional French teacher, and the Artistic Director of Mad Gleam Press, a bilingual collective of writers and artists based in Monterey CA, New-York, and Paris.

Jeff Erwin is a strange fellow indeed. He lives in Monterey with his daughter and a vast amount of books.

Heather Flescher is a writer, poet, actor, spoken word performer and transgender activist. She grew up in Massachusetts and has lived on the central coast of California for the past twenty-three years. Her first book of poetry, “One Foot on the Ground”, came out in 2016. She has acted in numerous plays and performed her own writing hundreds of times. Her first play, “Daughters of Nothing”, was produced at the Paper Wing Theatre in Monterey in the spring of 2017.  She is currently preparing her new poetry chapbook, a look at the intersections between trans issues and mental health.  Heather lives with chronic fatigue and strives to make her society more accessible for everyone.

Kenny Garcia was born and raised in New York City. Influenced by hip-hop music, slam poets, and Langston Hughes, Kenny has performed his poetry in New York, Michigan, California, and Palestine. He has workshopped his poetry at Voices of our Nation Arts (VONA) writing workshops. Kenny graduated from SUNY-Binghamton with a degree in History and English-Creative Writing. He currently works as a librarian at CSU-Monterey Bay, and lives in Marina, California with his partner, daughter, and pet fish.

Dr. Chrissy Hernandez is a writer, organizer, and educator from Salinas, California. After working as a spoken word teaching artist for over a decade in a Bay Area continuation high school, public arts high school, juvenile hall, middle school, and other community sites, she is now an assistant professor of service learning and social action at California State University, Monterey Bay. She is the managing editor of Lessons in Liberation: An Abolitionist Toolkit for Educators with AK Press.

Kent Leatham is a poet and translator whose work has appeared in dozens of journals and anthologies in the U.S. and abroad, including Ploughshares, Prairie Schooner, Fence, Able Muse, and Poetry Quarterly. He studied poetry at Emerson College and Pacific Lutheran University, and currently teaches writing at California State University Monterey Bay, located on the traditional land of the Ohlone, Costanoan Rumsen, and Amah Mutsun peoples (who are not dead). He is pansexual. His work can be found at his website.

Aideed Medina, poet and spoken word artist, creates and performs poetry in English, or Spanish, as dictated by the inspiration of each individual piece. She enjoys mentoring high school students under the direction of the Fresno Poet Laureate, Bryan Medina, with the Poetry Out Loud Program, and for youth slam competitions throughout the central valley. She was honored to be the 2017 Representative for the Loud Mouth Poetry Slam of Visalia, CA at the Women of the World Poetry Slam DTX, and recently received the 2017 Fresno Arts Council Horizon Award for her contributions to the city’s artistic and cultural scene in the category of individual artist. She is currently working on her first two manuscripts, “A California Dime” and “Mis Papelitos”.

Nelson G Nelson is a non-binary poet and musician from the Sonoran desert. They began writing songs as a small child and the words never stopped coming – arriving more as impulse than conscious choice. Their work draws from a wide range of influences: from Lorca, to the Beats, to the classic Zen masters. Nelson’s words are highly visual and somewhat surreal with a musical grit. The selections that will be read at the Monterey Poetry Festival portray a young life in transience – those roadside lessons gleaned from tarot cards, grizzly bears, and the unfettered recklessness of a 22 year old romantic.

Brian Sheffield is a performance poet based out of the central coast in California. He is co-founder of Mad Gleam Press, a French-American small press. He is also co-editor of POST(blank) and an editor with the Boukra Collective. He has performed and been published internationally, among predominantly independent circles.

Chris Siders graduated from CSU Monterey Bay with a B.A. in Human Communications with a concentration in Creative Writing and Social Action. His involvement with the MENding Monologues production as a director led him to become an ally organizing events such as One Billion Rising, Slut Walk with Title IX at CSUMB. He administered feminism workshops at Soledad Correctional Facility with Richie Reseda, who was featured on CNN’s “The Feminist on Cellblock Y.”. Siders performed alongside poets such as Rudy Francisco, Shihan The Poet, and graced stages such as Dominican University, UC Santa Barbara, Washington State University and many more.

Daniel B. Summerhill is Assistant Professor of Poetry/Social Action and Composition Studies at California State University Monterey Bay. He has performed in over 30 states, The UK and was invited by the US Embassy to guest lecture and perform in South Africa. His work has appeared in or is forthcoming in Columbia Journal, Obsidian, Rust + Moth, Button Poetry, The Hellebore and others. His collection Divine, Divine, Divine is available now from Oakland based-Nomadic Press. His second collection of poems, Mausoleum of Flowers will be out spring 2022 from CavanKerry Press.

Jean Vengua is a Filipinx American visual artist and writer/poet, author of Prau (Meritage Press), The Aching Vicinities (chapbook, Otoliths Press), Corporeal (Black Radish Books, 2019), and Marcelina (Paloma Press, 2020). With Mark Young, Vengua co-edited The First Hay(na)ku Anthology and The Hay(na)ku Anthology Vol. II. In the mid-1990s, with Elizabeth H. Pisares, she formed Tulitos Press and published and edited the Debut: The Making of a Filipino American Film by Gene Cajayon and John Manal Castro, and The Flipside by Rod Pulido. Vengua lives in Monterey and manages programs for the nonprofit Asian Cultural Experience (ACE) in Salinas Chinatown. Her art can be found at https://www.jeanvengua.com and newsletter at jeanvengua.substack.com.

Elizabeth (Lizz) Wiles is a lifelong poet and current senior at CSUMB. She will be graduating with a bachelor’s degree in Humanities and Communication and a concentration in Creative Writing & Social Action. She was raised in Madera, CA, and moved to Monterey for college back in 2017. Lizz has been published in CSUMB’s literary journal, In The Ords, and The America Library of Poetry’s Accomplished, when she was a junior in high school. Lizz’s poetry paints themes of self-realization, loss, worldly struggles, everyday wonders, nature, feminism, and mental health validation and awareness. Writing has always been her avenue for contemplation, solace, and growth.

August 14th, you’ll be able to see the beautiful and amazing talent of No Existo, Turiya Autry, and Chris Carr.

After the music and poetry, DJ Papacitx will take us through twilight with their curated nighttime tunes.

Old Capitol Books is collaborating with Close to Home Collective, which is working to bring literature and arts into your living room to help lower the number of people seeking entertainment out of their homes during the pandemic. (Seriously folks, stay inside.) END_OF_DOCUMENT_TOKEN_TO_BE_REPLACED 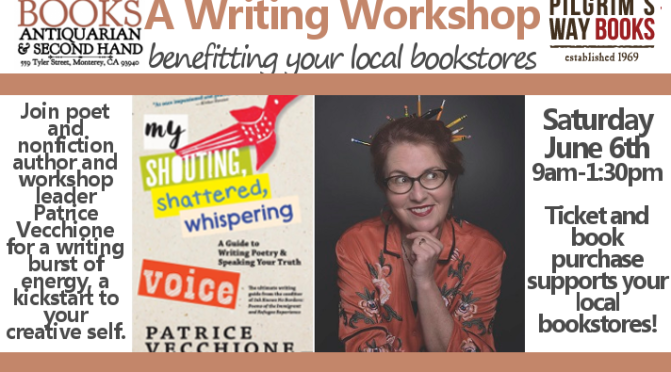 Join poet and nonfiction author and workshop leader Patrice Vecchione for a writing burst of energy, a kickstart to your creative self.
Get the juices flowing! END_OF_DOCUMENT_TOKEN_TO_BE_REPLACED

Hello everyone! Thank you for your love and support over the years.  We’re thinking of innovative ways to try to stay afloat during these extremely difficult times, but we know that without extra help Monterey’s Old Capitol Books won’t be able to be around much longer. 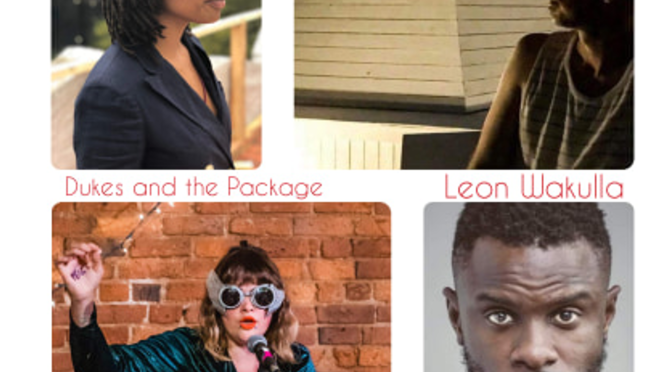 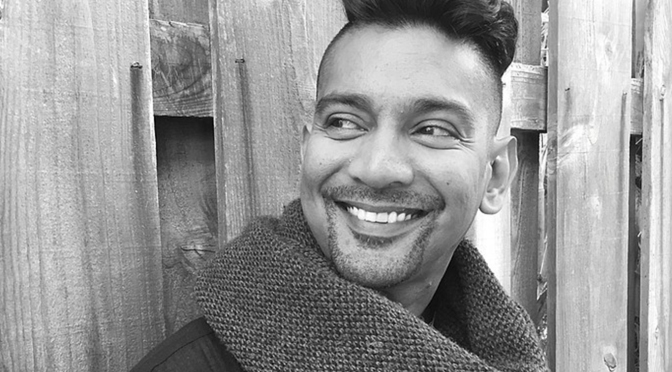 A Night of Poetry
Featuring Rachelle Escamilla & Hari Alluri (plus others!)

The third Sunday of each month, the Monterey Anarchist Black Cross meets to send books and letters of support to political prisoners in US jails and prisons. END_OF_DOCUMENT_TOKEN_TO_BE_REPLACED