Thursday 8 September 2016, 4:30-6pm: A new memoir by Craig Carlson tells he story about how he introduced American-style pancakes to Paris! Carlson will be in-store discussing his experience living the American dream in France and signing copies of his new book, Pancakes in Paris: Living the American Dream in France.

Craig Carlson was the last person anyone would expect to open an American diner in Paris.

He’s not French. (He’s American). He never worked in a restaurant and had no experience running any sort of business.

What he did know was that he craved a good, old-fashioned American breakfast whenever he was in the land of crepes and croissants and figured there were others who felt the same.

Pancakes in Paris: Living the American Dream in France is the story of one man’s crazy dream of moving to the culinary capital of the world and opening its first American diner, and how it changed his life (and French culture) forever.

From raising money from friends in Hollywood to start the business, to figuring out how to get bacon and other hard-to-find ingredients in France, to convincing the Parisian palette that sweet (pancakes) and savory (home fries) belong on the same plate, Pancakes in Paris is chock-full of hilarious mishaps and heartrending stories about one American finding his way.

From Carlson’s turbulent, dysfunctional childhood to his finding true love in the city of lights, Pancakes in Paris will entertain and inspire those wish to overcome the odds and achieve their dreams. See reviews and more information about the book and his website here. 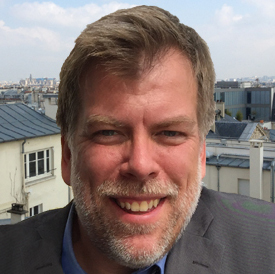 Craig Carlson is the founder and owner of Breakfast in America, which now boasts three American diner locations in Paris. Originally from Connecticut, Carlson first visited France as a student and, like many before him, instantly fell in love with the country. It was in Paris that he developed his love for film and decided to make a career of it. After graduating from the University of Southern California with a master’s in film production, Carlson worked as a screenwriter and short filmmaker before landing a job with a TV show in Paris.

It was during this time that Carlson became convinced that the time was right to introduce the French to the joys of the American breakfast. Breakfast in America first opened its doors on January 4, 2003, during one of the heaviest snowfalls in Paris in years (it was taken as a good sign). Carlson and his husband split their time between Paris and Los Angeles.