“A trial site was found for our free monthly event open to the public every second Tuesday. Come early & sign up for a five to seven minute reading from any genre: prose, screenplay, poetry & essay that follows 15-20 minutes from a featured local published reader.”

We have a very special treat on August 12th. Nicole Henares sometimes masquerades as a poet named Aurelia Lorca, and has two book length collections of her poems- Trills From A Numbed Tongue of Duhhhh, and Putting On My Red Shoes and Dancing The Blues. Obsessed with all that is California Gothic, she is currently working on her first novel about the Andalusian immigrant community of Monterey’s Cannery Row. She will be accompanied by Flamenco guitarist, Antonio Triana II who’s worked with everyone from Jose Greco to Yaelisa. He is the son of flamenco dancer Antonio Triana. From Hollywood, Antonio has now relocated to the Bay Area. 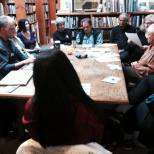 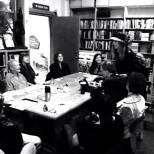