Hey there you lovers of social theory and philosophy – Old Capitol Books is teaming up again with the Direct Action Monterey Network to bring a series of seminars on critical and political theory to downtown Monterey.

This summer’s seminars are facilitated by a collection of artists, professors, and students who live and work on the peninsula, covering the topics of Transgender Anarchism, Marxist-Feminism, Queer Theory, and Transnational Feminism.

In the past, the TCAS seminars have included led discussion groups around readings addressing Polyamory, Anarchism, Prisons & Incarceration, Alternative Sexualities, Understanding Fascism, and Revolutionizing Education (just to name a few).  This summer we’re moving into our twelfth series of TCAS and it’s a great hit!

These series of seminar sessions have been put together to encourage the exchange of ideas, experiences, and knowledge surrounding a particular topic or theme. We want to create a place where people can meet with other people from Monterey Bay communities to talk about current events and discuss new philosophies and ways of thinking critically about society. Though these seminars have been designed for non-students, and for those of us who have had little or no college experience, everyone is invited to participate. We believe that everyone can have something to offer to the seminars as we move through current debates in politics and different political and social theories.

Queer theory is a diverse field of studies that involves a lot of disparate ideas. It’s a rapidly expanding body of literature that seeks to answer a series of questions about what is normal, how normal comes to exist, and who is excluded or oppressed by those notions of norms. In bed.

Transgender Anarchism is a talk aimed at audiences unfamiliar with trans issues, seeking to illustrate the ways in which societal power structures impact trans people, with attention to the intersectionality of various forms of privilege and oppression and the vastly different life experiences they create. We will explore the normative model of established gender transition and the access to legal and medical resources it requires, and consider alternative options for transgender existence.

Recommended readings are from Captive Genders: Trans Embodiment and the Prison Industrial Complex, edited by Eric A. Stanley and Nat Smith, and Normal Life: Administrative Violence, Critical Trans Politics, and the Limits of Law by Dean Spade. 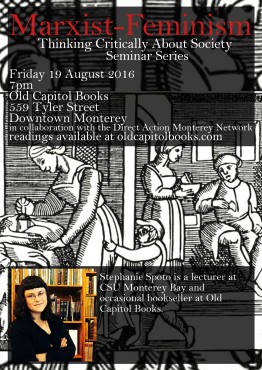 What is the function of domestic labor under capitalism? Why were women pushed out of the factories after the war? How can we understand the “unhappy marriage of Marxism and feminism”? This seminar will look at the works of Angela Davis, Silvia Federici and other key Marxist and feminist thinkers to explore the nature of the feminist movement in relation to anti-capitalist movements. 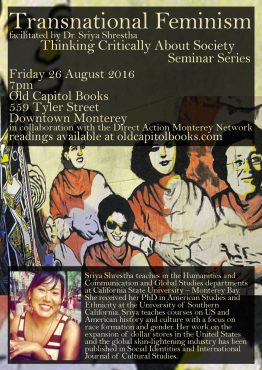 In this seminar, we will study ‘Transnational Feminism.’ Transnational feminist theory and activism centers gender issues that cross national boundaries such as war and empire, migration, and globalized labor. Drawing on post-colonial theory, transnational feminism also directly engages the politics of knowledge production. This includes challenging the first world ‘experts’ and intellectuals who so often speak for and about women in the global south by amplifying the voices and engaging the analyses of third world women themselves.