Last year Old Capitol Books and the Direct Action Monterey Network hosted the Theory and Philosophy Reading Groups, focusing on philosophers and theorists who had been in prison.

Last year members of the community got together each month to explore philosophers such as Angela Davis, Antonio Gramsci, Nadezhda Tolokonnikova, Antonio Negri, George Jackson, and many others. 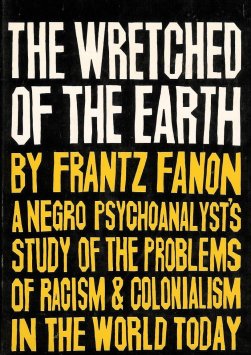 Our first reading group will be Friday 29 January 2016, 7pm. And we will be reading Frantz Fanon’s chapter “On Violence” from his classic work Wretched of the Earth.

Suggested reading: the introduction to The Wretched of the Earth by Jean-Paul Sartre. Read online for free here.

Frantz Fanon was one of a few extraordinary thinkers supporting the decolonization struggles occurring after World War II, and he remains among the most widely read and influential of these voices.  His brief life was notable both for his whole-hearted engagement in the independence struggle the Algerian people waged against France and for his astute, passionate analyses of the human impulse towards freedom in the colonial context.  His written works have become central texts in Africana thought, in large part because of their attention to the roles hybridity and creolization can play in forming humanist, anti-colonial cultures.  Hybridity, in particular, is seen as a counter-hegemonic opposition to colonial practices, a non-assimilationist way of building connections across cultures that Africana scholar Paget Henry argues is constitutive of Africana political philosophy.

Tracing the development of his writings helps explain how and why he has become an inspirational figure firing the moral imagination of people who continue to work for social justice for the marginalized and the oppressed.  Fanon’s first work Peau Noire, Masques Blancs (Black Skin, White Masks) was his first effort to articulate a radical anti-racist humanism that adhered neither to assimilation to a white-supremacist mainstream nor to reactionary philosophies of black superiority.  While the attention to oppression of colonized peoples that was to dominate his later works was present in this first book, its call for a new understanding of humanity was undertaken from the subject-position of a relatively privileged Martinican citizen of France, in search of his own place in the world as a black man from the French Caribbean, living in France.  His later works, notably L’An Cinq, de la Révolution Algérienne (A Dying Colonialism) and the much more well-known Les Damnés de la Terre (The Wretched of the Earth), go beyond a preoccupation with Europe’s pretensions to being a universal standard of culture and civilization, in order to take on the struggles and take up the consciousness of the colonized “natives” as they rise up and reclaim simultaneously their lands and their human dignity.  It is Fanon’s expansive conception of humanity and his decision to craft the moral core of decolonization theory as a commitment to the individual human dignity of each member of populations typically dismissed as “the masses” that stands as his enduring legacy.